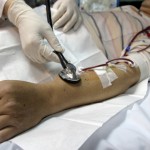 A report on CBS 42 out of Birmingham says the Alabama Department of Health is investigating deaths and illnesses at a kidney dialysis center in the city of Bessemer.

The report says the clinic was closed on May 8, after two patients died and several others were hospitalized.

The clinic is owned by German company Fresenius, which operates about a third of all U.S. dialysis centers for patients with kidney failure. The company also sells dialysis machines and supplies to rival clinic operators in the U.S. and Europe.

Plaintiffs in a number of lawsuits allege that Fresenius has previously endangered dialysis patients by sitting on information that one of its products was potentially hazardous.

In November, 2011, Fresenius sent a memo to dialysis centers that the company operates in the United States, warning them that its Granuflo product was linked with a higher risk of cardiac arrest. That in-house memo referred to “troubling findings” about Granuflo’s potential connection to cardiac arrest, and advised that “this issue needs to be addressed urgently.”

But Fresenius failed to share that warning with other U.S. dialysis centers it doesn’t operate, which also use Granuflo. Those centers continued to unknowingly use Granuflo until the FDA learned of Fresenius’s warning to its own clinics, and instructed the company to inform other dialysis providers of the risk.

The CBS 42 story quotes an official with Alabama’s Bureau of Healthcare Providers as saying that the agency has not yet made a final determination of what caused the problems at the Bessemer clinic. Alabama health officials are working with physicians, clinic staff, company officials and the U.S. Centers for Disease Control and Prevention as part of an ongoing investigation.