Home > Product News and Recalls > Study Finds the Busier the ER, the Better

Study Finds the Busier the ER, the Better 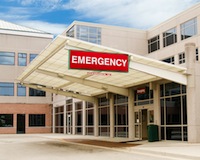 It is not surprising that the quality of care at the emergency department varies by hospital, but a new study suggests that surviving a life-threatening illness or injury may likely depending on the busyness of the emergency room. The research, published in the journal Annals of Emergency Medicine, showed that if you are treated at a busy emergency department, you may be treated better than if treated at one that handles fewer patients.

The researchers examined data from 3,000 hospitals on 17.5 million patients throughout the United States. The information revealed that the overall risk of dying in the hospital was 10 percent lower for patients who initially went to the busiest emergency departments in their area rather than to the least busy hospitals.

For time-sensitive, life-threatening illnesses or injuries, the discrepancy between the survival rates was even greater. Death rates were 26 percent lower in the busier of hospitals for patients suffering from a potentially fatal infection. Those who went to the busiest emergency departments for a lung failure had a 22 percent lower death rate than those who went to the least busy ones. The study also indicated that heart attack patients had a better chance of survival when in the busier hospitals.

The study concluded that around 24,000 fewer patients would die each year if all emergency patients received the quality of care provided at the busiest of emergency departments. Researchers found the results remained steady even when they accounted for the differences in the patient’s health, income level, hospital, and technology. The study was not conducted to look into the reasons for the finding, and researchers emphasized that those seeking immediate medical treatment should call 911 or go to the closest emergency facility because these findings are still being analyzed and it is not certain what makes one hospital better than another.

If you believe that you or a loved one was injured as a result of inadequate medical emergency care, contact the experienced medical negligence lawyers at Lopez McHugh, LLP to discuss your legal options. There is no cost or obligation for the initial consultation and your information will be kept confidential.