Another recall from compounding pharmacy 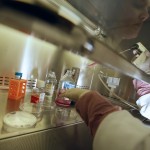 A Georgia compounding pharmacy called Clinical Specialties is recalling syringes of the drug Avastin, following reports that they may have caused eye infections.

Compounding pharmacies prepare specialty drugs from components provided by other sources, in response to individual orders from physicians. CBS News reports that Avastin is approved as a cancer drug. But compounding pharmacies such as Clinical Specialties have been repackaging it into small vials so eye doctors can use it to treat macular degeneration, a common vision disorder that affects seniors.

Compounding pharmacies, which aren’t subject to the same regulations as other pharmaceutical manufacturers, have been under increased scrutiny in recent months.

Late last year, an outbreak of fungal meningitis was traced to a batch of steroid medication that came from a Massachusetts compounding pharmacy called the New England Compounding Center. To date, the U.S. Centers for Disease Control report, that outbreak has killed 50 people and sickened 722 in 20 different states.

The same week the Avastin recall was announced, the U.S. Food and Drug Administration announced a national recall of drugs from a New Jersey compounding pharmacy called Med Prep Consulting Inc. The Med Prep recall included dozens of antibiotics, pain relievers and drugs employed in labor and surgery, because of concerns over potential mold contamination. No illnesses were reported in that case.