Faulty hip joints were meant to be more durable 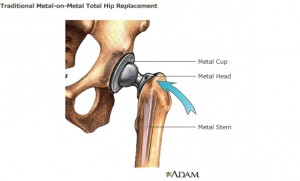 Ironically, a type of hip implant that’s prompted thousands of lawsuits was designed specifically to prevent the types of problems it’s allegedly causing on a wide scale, according to a report in “Arthritis Today.”The report mentions a study published in respected British medical journal “The Lancet,” which found that metal-on-metal artificial hip joints are far more likely to fail within five years than other available types of hip replacements.

The study found that the implants were more likely to fail in women. But for both women and men, failure rates were higher for devices with a larger head – which is the ball of the device that fits in the hip socket.

The most common factor leading to early failure is loosening that occurs over time as the bone erodes. Buchalter said early models seemed to indicate that the large-head, metal-on-metal models had lower wear, so they were marketed to active, younger adults.

Not only did they prove to have a higher failure rate, but they also generated complaints of metal debris breaking off and releasing toxic ions in the blood.

Part of the problem is that the implants were put on the market without being safety tested in humans, through a loophole in the approval process that allows devices to be approved based on their supposed similarity to devices that were previously put on the market.

The lawsuits against manufacturer DePuy Orthopaedics, a division of Johnson & Johnson, allege that the company continued to market the devices years after receiving information about the problems they were causing patients.