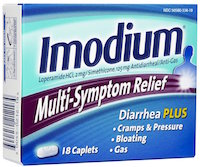 As the opioid abuse epidemic continues to grip the country, one particular drug is getting some unexpected attention.

We’re well aware of Percocet and OxyContin at this point and have been warned repeatedly about their addictive nature and the potential for future prescription drug and heroin abuse. However, spikes in overdoses of a different drug are now being seen more frequently and doctors, as well as the FDA, are warning consumers to use caution when using it.

The drug is loperamide, known commercially as Imodium, and it is mostly used to relieve diarrhea.

Opioid addicts are using high doses of loperamide to try to self-medicate their opioid withdrawal symptoms while others have been taking large doses simply to experience the “euphoric” feeling the drug can produce.

Unfortunately, large doses of Imodium can also produce a rapid heartbeat, make you faint, and possibly kill you.

In fact, no less than 10 people have died from loperamide overdoses since 1976. And, while that number may seem small, it is the overall statistics that have the medical community taking note. Of the 48 cases of heart complications presenting after a loperamide overdose, more than half have occurred in just the past six years.

Most alarming, however, is the fact that those 10 deaths are part of this most recent number. This means that we’re taking more loperamide in more aggressive doses than ever before, and this is a very dangerous trend that sets the stage for an ever-increasingly dangerous cycle.

In an effort to break the cycle on their own, the patient then begins taking high doses of Imodium to treat their withdrawal symptoms, usually based on advice gleaned from internet forums. This overdose, in turn, harms their heart and, in some cases, causes their death.

And this doesn’t even touch on those that are taking Imodium just to get high. Patients have been presenting their identification to purchase particular medications over the counter for years now. It seems as though we’re well on our way to being carded and monitored when trying to relieve an upset stomach.