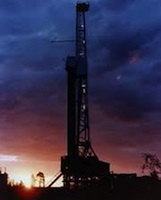 A new study published by the journal Endocrinology suggests that chemicals used in fracking may decrease men’s sperm count and negatively affect the developmental health of those exposed. Researchers from the University of Missouri observed mice that had been prenatally exposed to fracking chemicals and found lower sperm counts when the mice reached adulthood.

Hydraulic fracturing—more commonly known as “fracking”—uses a combination of sand, water, and chemicals to break through thousands of feet of earth and find natural gas deposits. The process has been criticized by many due to research showing it poses significant health risks to workers as well as nearby residents. Dangerous chemicals used or released during fracking can find their way into groundwater and harm those exposed.

Researchers in the new study sought to measure “the endocrine-disrupting activities of 24 chemicals used and/or produced by oil and gas operations.” Mice exposed prenatally to these chemicals were observed through adulthood for reproductive and developmental outcomes. The study found that 23 of the chemicals tested “can activate or inhibit the estrogen, androgen, glucocorticoid, progesterone, and/or thyroid receptors,” resulting in decreased sperm count and increased testes, heart, and thymus weight, as well as increased serum T. The researchers conclude that fracking chemicals may pose developmental and reproductive health risks to humans and other animals exposed to them.

Were you or a loved one injured after exposure to fracking chemicals? If so, you may be eligible to file a lawsuit. Contact the attorneys at Lopez McHugh for a free consultation.