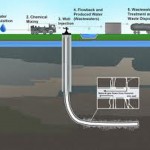 Unsealed court documents say natural gas drillers, including Range Resources Corp., paid a $750,000 settlement to members of a Pennsylvania family who claimed their water was contaminated by the drilling technique called hydraulic fracturing, or “fracking.”

Fracking involves pumping millions of gallons of chemically treated water underground to break up underlying shale formations and release natural gas. It’s controversial because the technique has generated a number of environmental concerns, including the possibility that the toxic chemicals in the water may contaminate drinking water supplies.

The technique is used along the Marcellus Shale — a gas-rich underground rock formation that also extends into New York, Pennsylvania, Maryland, Ohio and West Virginia.

According to a story in Bloomberg, the natural gas drilling companies have resolved a number of disputes with homeowners from Texas to Pennsylvania. But they frequently demand secrecy in exchange for buying properties, delivering fresh water or paying settlements.

The $750,000 was paid to family members who filed suit in 2010, alleging the natural gas drillers flaunted Pennsylvania environmental law when drilling on land adjacent to their property. As a result, according to the lawsuit, polluted well water caused them to suffer burning eyes, sore throats, severe headaches and other symptoms from toxic gas.

Bloomberg reports that Common Pleas Court Judge Debbie O’Dell-Seneca ordered 900 pages of documents unsealed after rejecting the companies’ arguments that such a move threatened their right to privacy. Judge O’Dell-Seneca wrote a 32-page opinion that concluded that companies do not have a right to privacy under the Pennsylvania Constitution because they are not people and do not have “‘spiritual nature,’ ‘feelings,”intellect,’ ‘beliefs,’ ‘thoughts,”emotions,’ or ‘sensations,’ because they do not exist in the manner that humankind exists.”