Lasik Surgery Not Nearly as Foolproof as Most Believe 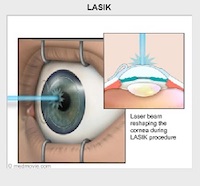 For those among us with imperfect vision, the morning ritual of finding one’s glasses or putting in contact lenses is the physical embodiment of a necessary evil. It is something you neither want to do nor like to do, but it is something you must do in order to function throughout the day. Even without the risks to your personal safety that could come with a day of diminished vision, the ensuing headache and other bodily effects would almost certainly have you reaching for your vision correction sooner rather than later.

In the 90s, those who required vision correction were thrilled to learn that a new procedure had been developed that would, in a matter of minutes, use laser technology to surgically restore their vision to perfect – or in some cases even better than perfect – condition. It was called Lasik, and it took the optometry world by storm.

Nearly 10 million Americans have had corrective laser eye surgery since, and while there are success stories, some believe that the risks that come with the procedure have never been fully addressed; or have even been glossed over at times.

A recent article in the New York Times is shining a light on some of these failures as more and more people come forward to discuss the side effects of their Lasik surgery. “My vision is considered 20/20 because I see the A’s, B’s, and C’s all the way down the chart,” says one such patient. “But I see three A’s, three B’s, three C’s.” The patient says that he was never told, across multiple consultations, that he could be permanently harmed by undergoing Lasik surgery.

A new clinical trial conducted by the FDA finds that almost 50 percent of patients whose eyes were otherwise healthy developed “visual aberrations” after the surgery that they did not have before the procedure. Nearly 33 percent developed clinically-dry eyes for the first time as well. Yet, according to the Times, many ophthalmologists claim that Lasik may actually be the safest surgical procedure in existence and that such side effects are “exceedingly rare.”

Hundreds of thousands of people will have Lasik surgery this year, just as they have done every year since the procedure was approved. As those who suffer Lasik side effects become more vocal, perhaps those that are considering the procedure will have more information available to them in order to form a more educated – and well-focused – opinion.