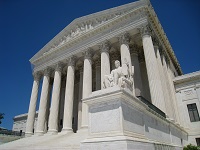 The Supreme Court has passed down an 8-1 ruling against out-of-state plaintiffs’ ability to sue Bristol-Myers Squibb in California over the company’s blood thinning medication, Plavix. The ruling is being viewed as a win for those who oppose “venue shopping,” or plaintiffs who are perceived to seek out favorable courts for their cases.

When numerous cases throughout the country involve “common factual issues [which] are sufficiently complex,” plaintiffs and their lawyers may look to consolidate their claims into one court. Consolidated litigation may involve holding a trial in a place that may not be a particular plaintiff’s place of residence, and generally helps to expedite cases and results for plaintiffs who need it most.

The impact of the ruling could be significant, and Johnson & Johnson in particular could view the Supreme Court’s ruling as a victory. The corporation has more than 1,000 cases pending against it from all over the country regarding its talc products. The Johnson & Johnson cases are centralized in Missouri and claims have long been made that these products put women at an increased risk of ovarian cancer. The ruling has already been the basis of a mistrial in one talc case.

A 2016 study showed that a woman could be 33% more likely to develop the disease after long-term application of talc powder to her genitals. Additional studies have suggested a similar link between talc and cancer, further amplifying the potential danger of repeatedly using talc products.

The Supreme Court ruling puts four Missouri rulings in particular danger of being overturned. Combined, these cases awarded plaintiffs more than $300 million. Jim Onder, whose St. Louis-based firm represents many of the women who have been impacted by J&J’s talc products, says that Missouri is an acceptable venue for the cases because much of the company’s packaging and labeling takes place in a factory in nearby Union.

Michael Duffy, a liability lawyer based in New York, adds that the Supreme Court ruling “really puts a horrific burden on the plaintiff.” Many cases will likely have to be retried, despite a jury having already found a definitive link between talc and cancer. Plaintiffs and their families could be forced to relive the tumult of their cancer with no guarantee of compensation.

Juries have ruled critically against J&J in light of the company’s actions surrounding their apparent knowledge on the danger of their products. Internal documents allege they’ve been aware of potential risk to consumers from their talc since the 70s. An additional document from an outside medical consultant in 1997 informed J&J that continuing to deny the link between talc and ovarian cancer would be “denying the obvious in the face of all evidence to the contrary.”

J&J’s actions suggest that they’re disinterested in removing talc from their products that still contain the ingredient, even though they quietly removed it from their baby powder decades ago in favor of corn starch. While the Supreme Court’s ruling may count as a win for the company, it’s a blow to women who have already been harmed by J&J’s seemingly negligent behavior and leaves thousands of others at risk.