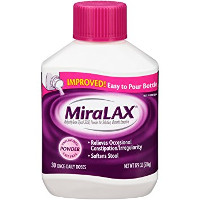 In another case of off-label use gone wrong, parents are finding that the over-the-counter laxative MiraLAX may be causing severe neurological and psychological distress in infants and toddlers. Researchers at the Children’s Hospital of Philadelphia are leading the way to find out just how bad the problem may be.

MiraLAX is not recommended for use in anyone under the age of 17. However, a recent post by ABC6 Action News in Philadelphia claims that the news organization has learned that physicians regularly recommend the laxative to parents to ease constipation in those far too young to safely use it.

The issue stems from the presence of some of the same chemical compounds in antifreeze also being present in MiraLAX. In fully developed bodies, the compounds are simply another ingredient for the body to break down in a seemingly routine medication. However, in the younger and still-developing brains of infants and toddlers, the chemicals can wreak havoc; turning children that were once happy and laughing into angry, dark, and paranoid shells of their former selves.

Parents claim that the situation resembles that of a switch being flipped as their children developed signs of anger and even rage, as well as aggression, mood swings, and paranoia. One parent described her child’s behavior as “near psychiatric” and another laments that the issue has caused her son to be “robbed of most of his childhood.”

What is perhaps most frightening is that the side effects of MiraLAX use in small children may be permanent. Nicole Oerkifitz, now 19, was placed on MiraLAX when she was three and a half years old and remembers being a happy and content toddler. By second grade, however, she “started hating” and “wanted to kill everybody.”

Some 3,000 parents have come together in a Facebook group to share their stories and try to push the FDA to action. While no additional warnings regarding MiraLAX are on the immediate horizon, the agency did fund a $325,000 study into the effect of polyethylene glycol 3350, or PEG 3350, on young children. PEG 3350 is the ingredient that MiraLAX shares with antifreeze.

CHOP doctors have refused to comment on an ongoing study and the FDA is waiting on the results of that study before taking action. For its part, Bayer has reiterated that dosing information found on MiraLAX packaging applies only to adults and children over the age of 17 and it is only to be used for up to seven days.