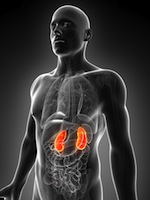 Sounding more like a piece from a spaceship than a class of drugs, proton pump inhibitors, or PPIs, are most widely used to treat gastric or digestive distress. Those with frequent bouts of heartburn, acid reflux, ulcers, and other ailments have almost certainly sought relief via a proton pump inhibitor at some point.

Numbers on the use of PPIs can be hard to come by. For example, we know that 2013 saw proton pump inhibitor prescriptions written for some 15 million Americans. However, any trip to the local drugstore will show you that PPIs are readily available over the counter as well.

This is important because a new study in the Journal of the American Society of Nephrology shows that long-term use of PPI’s can damage a patient’s kidneys. Beginning with chronic kidney disease, the patient could eventually fall into full kidney failure.

The kidneys are very important organs. Responsible for the filtration of waste and other toxins from your bloodstream, kidney disease and failure could lead to a lifetime of dialysis and other related complications.

The findings place renewed emphasis on recent calls for physicians to focus on prescribing drugs that are only medically necessary. Whether it is the discovery of antibiotic-resistant bacteria that are making it increasingly difficult to fight off infections or the effects of the prescription drug overdose epidemic that is gripping the country, doctors should work toward focusing on proportional responses to patient issues.

While a dose of medicine to bring some heartburn relief isn’t quite the same as taking a narcotic painkiller, caution should still be used. The study published in JASN showed a 28% jump in the risk of developing chronic kidney disease for frequent PPI users. The risk of full kidney failure was, in some cases, as high as 96%.

In many cases, digestive ailments can be treated with a modification in diet. Talk to your doctor about foods that raise the risk of developing acid reflux and heartburn and try to eat foods that are less harsh on your digestive system. While we all like the occasional slice of pizza and other greasy foods, is it really worth the potential injury to a vital organ in your body?