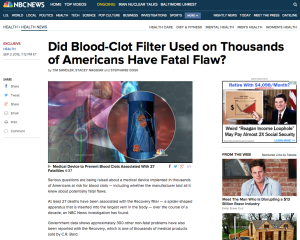 A year-long investigation by NBC Nightly News has raised serious questions about why medical device manufacturer C.R. Bard, Inc. continued to sell and market its inferior vena cava (IVC) filters even after it became aware that its filters were failing and causing death and other serious injuries at rates significantly higher than other similar devices.

The NBC News investigation linked 27 deaths and more than 300 injuries to failures associated with the Recovery model IVC filters manufactured by New Jersey-based C.R. Bard, Inc. One of those people was Dodi Froehlich, a 45-year-old single mother of two from Florida and now a client of national law firm Lopez McHugh LLP. The news story, “Did Blood-Clot Filter Used on Thousands of Americans Have Fatal Flaw?”, also questions why Bard did not recall the Recovery filters even after a confidential study commissioned by the company “urgently” urged further investigation of the device’s performance.

“Serious questions are being raised about a medical device implanted in thousands of Americans at risk for blood clots — including whether the manufacturer told all it knew about potentially fatal flaws,” the story says.

Froehlich, who is now being represented by Lopez McHugh, had a Bard Recovery IVC filter implanted in 2004 as a precautionary measure after a car accident; she was believed to be at an increased risk of blood clots due to immobilization and pelvic fracture.

“The filter was supposed to stop them from reaching her heart or lungs; instead, it nearly killed her,” the NBC investigation says.

Four months after receiving the IVC filter, Froehlich developed a severe headache and passed out, the story said, adding that she flat-lined in the ambulance on the way to the hospital. It took two days for doctors to discover what was causing Froehlich’s symptoms; a piece of the IVC filter had broken off and pierced her heart. Medical records show that blood was draining from her heart into the pericardial sac, preventing the heart from pumping correctly.

Froehlich was rushed into emergency open-heart surgery, where surgeons were able to remove the broken strut, drain the pooling blood from around her heart, and suture the perforation closed.

Froehlich is not alone in having suffered from an IVC filter failure. Lopez McHugh has worked for years to protect the rights of dozens of people across the country who have been injured or seen a family member killed by complications related to a Bard IVC filter.

“We have been working for years to draw attention to the serious public health threat that these devices can pose,” said partner Ramon Rossi Lopez, who has been leading Lopez McHugh’s IVC filter lawsuit legal team. “We commend NBC Nightly News for dedicating more than a year of their time and exhaustive effort to help bring this situation to light on a national scale.”

An IVC filter is a small, cone-shaped, cage-like medical device implanted into a patient’s inferior vena cava, the large vein that carries oxygen-depleted blood from the lower body up to the heart. IVC filters are intended to prevent a blood clot from reaching the heart or lungs. About 250,000 Americans are implanted with IVC filters each year, industry statistics show.

Lopez McHugh LLP represents dozens of people who have been injured by Bard Recovery filters in lawsuits against the manufacturer. It is believed that tens of thousands of Americans are implanted with Bard Recovery filters, or the G2 model which replaced the Recovery. More plaintiffs are expected to come forward as the risks related to the long-term use of retrievable IVC filters become more widely known.

On August 17, the U.S. Judicial Panel on Multidistrict Litigation ordered the transfer of all federal lawsuits filed over the allegedly defective IVC filters made by Bard to the District of Arizona. Ramon Rossi Lopez, founding partner of Lopez McHugh LLP, argued in favor of the transfer at a July 30 hearing in San Francisco.

Lopez McHugh has compiled resources to assist those who believe they may have been injured by a defective IVC filter. For more information, please visit the firm’s IVC filter web page.

About Lopez McHugh, LLP: For more than 30 years, the attorneys at the nationally-recognized plaintiffs’ law firm of Lopez McHugh have been obtaining justice for their clients. Battling defendants who take advantage of consumers such as pharmaceutical giants, nursing homes and medical professionals, insurance companies, auto manufacturers, and the manufacturers of defective medical devices.