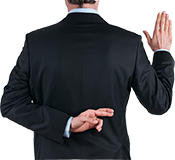 A growing body of evidence seems to suggest that the FDA; the regulatory agency in charge of ensuring that the foods and drugs we ingest will not harm us, may not be as independent as the public may assume them to be.

One of the largest and most publicly visible hits to the agency’s credibility occurred earlier this year when the FDA issued a draft guidance which cleared the way for drug manufacturers to distribute information to doctors that “rebuts, mitigates, or refines” information that is printed on drug labels.

The fact that it is the FDA themselves which require these labels notwithstanding, the idea of profit-focused drug manufacturers being permitted to rebut the safety warnings imposed on their medications should make one pause and take notice.

Fast track drug approvals and the makeup of the approval boards themselves only serve to add fuel to the fire. Washington’s revolving door of executives moving between corporations and the agencies which exist to regulate them is alive and well in all areas of government; the FDA is no exception.

So, when the FDA approved the use of OxyContin in children as young as 11 years old, at least one congressperson had finally seen enough.

OxyContin is a powerful pain medication. It is an opioid which is highly addictive and, like other drugs in its class, is lethal at high doses. It is also among the drugs that are most frequently abused as the United States faces a nearly unprecedented epidemic of prescription drug abuse, misuse, and overdose.

In a letter to the FDA, West Virginia Senator Joe Manchin lambasted the FDA, saying that he was “disgusted” by the decision and that the agency should be “ashamed of itself for this reckless act.” The senator cited scientific evidence for his disgust. In his letter he states that “an eleven year old’s brain has another fourteen years before it is fully developed” and that significant evidence shows that “drug use at an early age makes a child more likely to abuse drugs later in life.”

Manchin has called for an investigation into the agency’s decision saying that steps were skipped in the OxyContin approval. He wants to know why.

“Given the extraordinary public health crisis that we are facing and the well-documented damage that dangerously addictive drugs like OxyContin can do to a developing brain,” he states, “ it is difficult to believe that an independent panel of experts would have recommended the approval of this drug in children.”