Coumadin Use in Nursing Homes Under Scrutiny 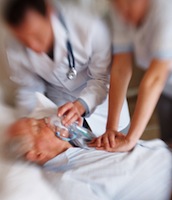 Coumadin has been a staple of the medical community for decades. As one of the most popular blood thinners on the market, the drug has been used by millions of patients. Doctors are learning, however, that no two patients react to the drug the same way. In fact, it may be (as one doctor put it) “the most dangerous drug in America.”

Nowhere is this becoming more evident than in our nation’s nursing homes. Long targeted for lapses in patient care resulting in everything from serious injury to death, nursing homes are becoming more and more dependent on the medications they give to their residents.

Advances in drug technology, even over recent years, have led to drastic improvements in patients’ quality of life, comfort, and manageability for some. In other cases, however, the indiscriminate use of powerful medications in largely unmonitored and, in some cases, neglected populations can end with tragic results.

Studies about the use of Coumadin in nursing homes are few and far between, but a growing amount of concern in the medical community may cause that to change. In one of the last studies conducted on the matter; a 2007 study published in the American Journal of Medicine, it was revealed that some “34,000 fatal, life-threatening, or serious events” could be attributed to the drug and its effects. A 2011 study published in the New England Journal of Medicine blamed Coumadin for 33,000 emergency hospitalizations of elderly patients between 2007 and 2009.

The effects of ill-managed Coumadin treatment are severe. Patients report internal bleeding, blood clots, severe bruising, and bleeding out from bodily orifices as a result. These events can cause permanent damage if not properly treated and some result in death.

Its popularity may, in fact, be a large contributor to the rise in the number of incidents as orders for Coumadin and patient prescriptions for the drug have largely become routine. As stated by Cheryl Phillips, senior vice president of public policy and advocacy at LeadingAge, “In fact, to not put people on blood thinners is a huge risk and in many cases malpractice.”

Given that 2.4 million senior citizens and disabled patients filled prescriptions for Coumadin and its generic equivalent warfarin in 2013, there is no sign that the popularity of the drug is waning in any way. Medical professionals will have to increase their level of vigilance and monitoring as more of an aging population goes on medications that, if not properly managed, could kill them rather than continue the high quality of life they desire.