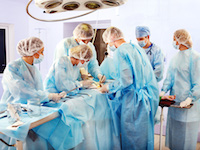 A medical malpractice lawsuit has been filed after a Connecticut man died during a surgical procedure because of an alleged drug mix-up. The 53 year old suffered from cardiac arrest during a double-level anterior discectomy performed at a surgical center. A recent article by Outpatient Surgery details the alleged events that are the basis for a medical malpractice lawsuit recently filed by his family.

While the man was undergoing a spinal surgery, a surgical assistant allegedly pressed against his blood pressure cuff, causing his reading to drop. When the reading dropped, the anesthesiologist monitoring the patient reacted to the false reading by giving the patient medication to remedy his perceived blood pressure issue. When trying to remedy the problem, the doctor allegedly gave the wrong medication. The complaint goes on to allege that the facility did not stock the proper medication to reverse the impact of the incorrectly administered medication.

Following these events, the patient went into cardiac arrest and was taken from the surgical center to a local hospital by ambulance. The patient’s family is now seeking damages for the actions taken during surgery as well as decisions made prior to the procedure, including performing the complicated medical procedure at a surgical center.

The lawsuit claims that this procedure is typically done in a hospital and requires an overnight stay. The suit questions whether the surgical center had authorization to perform the procedure and notes that the patient had appealed to have the surgery done at the hospital. He allegedly decided to have it at the surgical center after someone at the center told him that his insurance would not cover the surgery if it were done at the hospital.