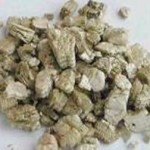 The U.S. Environmental Protection Agency says people with vermiculite insulation in their homes should assume that it contains asbestos, and act accordingly.

The problem is that a mine near Libby, Montana, generated more than 70 percent of all vermiculite sold in the United States from 1919 to 1990. It was often sold under the brand name Zonolite.

The vermiculite from Libby proved to be contaminated from an asbestos deposit at the mine, according to the EPA.

Breathing in asbestos particles can cause respiratory problems. One of the conditions associated with asbestos is mesothelioma, which is a cancer of the tissue lining the chest and abdominal cavity. According to the EPA, there is no known safe level of asbestos exposure.

The EPA describes vermiculite insulation as a “pebble-like, pour-in product” that is “usually gray-brown or silver-gold in color.” Pictures are provided on the agency’s Website.

Since people contract asbestos-related health problems by breathing in airborne particles, the EPA says the most important consideration if your home contains vermiculite insulation is not to disturb it. If you need it removed, the agency says you should bring in a trained professional.