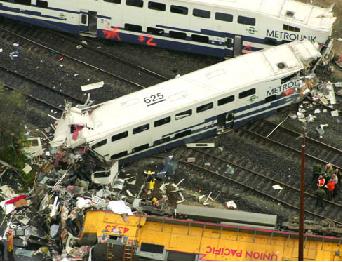 The text messages sent by Metrolink train engineer, Robert Sanchez, were made public by the NTSB this week.  Records show that Sanchez was texting a friend only 22 seconds before the deadly impact which killed 25 people, including Sanchez.  The accident also injured another 101 people on board and caused over $10  million in damages, according to a report by federal investigators.

In addition to the messages sent that day there were also messages sent less than a week prior with the implications of Sanchez allowing a friend to operate the train:

[Sanchez to friend]: “I’m REALLY looking forward to getting you in the cab and showing you how to run a locomotive.”

[Friend to Sanchez]: “OMG dude me too.  Running a locomotive. Having all of that in the palms of my hands.”

[Sanchez to friend]: “I’m gonna do all the radio talkin’…ur gonna run the locomotive & I’m gonna tell u how to do it. “

Sanchez had been caught with a cell phone twice before; once an employee turned him in, and another time a manager called his phone, which rang inside the cab.

The Union Pacific conductor’s blood and urine tested positive for marijuana, but no other crew member’s from either train showed traces of drugs or alcohol.

A month after the crash, former President Bush signed into law a bill requiring railroads to be equipped with a rail-traffic control system, similiar to ones used by air-traffic controllers.  Unfortunately the rail lines must implement by as late as 2016, leaving nearly 7 years of what could more deadly train collisions.